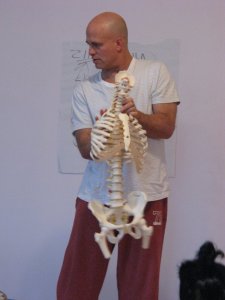 “HOW CAN THERE BE UNIVERSAL PRINCIPLES OF ALIGNMENT WHEN EVERYONE’S BONES ARE DIFFERENT?”

I have been a student of Paul Grilley’s for about five years now and I’ve been teaching yin yoga for three years. I first did a workshop with him at the Midwest Yoga Conference and as soon as he said “yoga is all in the bones” I was hooked. Paul is an anatomy genius and as I listened to him explain why there will always be poses that some of us will never be able to do a lightbulb went off over my head. I thought, “why isn’t every yoga teacher learning from this man?”

Five years ago Paul brought real bones to his workshops. not plastic bones, real bones, in a suitcase, so imagine him getting through airport security. he doesn’t do that anymore because they began to deteriorate, but you can see the pictures of those bones on his website. 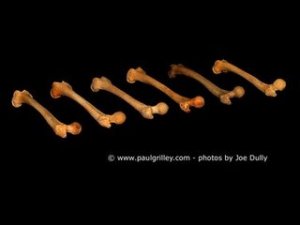 every yoga teacher who reads this blog should click on each picture and learn how everyone’s bones are different. our bones are different on each side of our bodies. we are not symetrical. let that sink in and think about how your students look in asanas.

Why is shoulderstand exceedingly easy for one person and the next one hates it?

Why does one person’s foot come out farther in front in pigeon and the next person can’t get their foot very much past their pubic bone? and how many yoga teachers walk over and immediately pull that foot out in front because that’s the way it’s “supposed” to be? yeah, that must be written on a palm leaf in India somewhere.

Why can the person who’s never done yoga do lotus in their sleep and the next person will never be able to do lotus no matter how much they try even though they’ve been doing yoga for 20 years?

And how many students reading this post feel inadequate because you can’t get into that Yoga Journal cover version of pigeon or shoulderstand no matter how many daily hours of yoga you do?

Get over it because it’s all in the bones. it has nothing to do with flexibility. nothing. zilch. not one iota. so forget about it. and that attitude should be extremely liberating and open up your yoga practice to something that is much deeper.

The asanas in yin yoga are done on the floor and are held for a minimum of 3 to 5 minutes because that’s the way the fascia of the body must be worked. it is totally different from a yang, moving, vinyasa practice. that is strength building muscular movement — the power of your muscles does not translate to flexibility. yin movement is about the health of your joints. both are need for a healthy body. yoga is about balance, the yin AND the yang of all things.

For poses such as pigeon, double pigeon (square pose), and cowface pose, the ability to do them comfortably has to do with how your femur connects to your pelvis. are your femurs internally or externally rotated? look at the femur pictures on Paul’s site and see how each one is different. combine that with the location of our hip sockets in our pelvis. the sockets might be shallow or deep or more toward the front or back or toward the sides. or higher up on the pelvis or farther down below. combine that socket position with the length and angle of the neck of the femur. I think you get the idea. and now ask yourself: how can there be universal principles of alignment when everyone’s bones are different? knowing that, how is that going to change your attitude about adjusting your students?

I am an example of extreme internal rotation. Paul uses me in his workshops in Chicago as an example of uber-Gumbyness. every year he asks me to lie on my abdomen and I bend one knee so that my leg forms a 90 degree angle. he then takes my foot and slowly moves my lower leg down out sideways so that my foot almost touches the floor — my opposite hip does not or barely comes up off the floor. and every year the entire studio of yoga teachers takes a huge collective gasp as they watch him do that. and then he does the other leg. and then he does both legs at the same time. with sound effects. by that time I’m usually asleep if I’m not laughing so hard at everyone’s reactions.

After my hip demo at this last workshop someone yelled out, “wouldn’t you like to x-ray her hips?” he said yes so I told him that I’m going to will my pelvis and femurs to him so if I die before him he can still continue to use me in his workshops. I found out later that Paul calls me “Linda Crazy Hips.”

In my years of study with Paul, I can line people up, examine how their arms hang, and know who will have an easy or difficult time with chatarunga by looking at the rotation of the insides of their elbows. that rotation will determine hand placement. hand placement will determine whether someone can comfortably hover off the floor or whether they are going to rip a rotator cuff next time they come down. I can tell how comfortably someone will be able to do shoulderstand if I ask them to drop their chin to their chest or clasp their hands behind them and lift the arms. it’s all in the bones, baby.

What I love about Paul is how he kills yoga’s sacred cows. iconoclasts are close to my heart since I’m an iconoclast yoga facilitator who loves to tweak cultural myths. he challenges you to think outside the yoga box. he throws out questions to make you think beyond the standard yoga paradigms like: in old traditional yoga books, why is there no mention of the “correct” alignment? one photo above is Paul showing us slides of old yoga books where everyone is doing the same asana differently, usually in the “wrong” way. how many of us teach that the knee should never go past the toes in a lunge? look at old pictures of Krishnamacharya. I’ve studied at the Krishnamacharya Yoga Mandiram three times and I can tell you that I’ve never heard Sir (i.e., Sri Desikachar, Krishnamacharya’s son) use the word “alignment” once.

Paul acknowledges that his teaching is not everyone’s cup of chai. we become angry when anyone challenges our long-held beliefs that we thought were so solid. Paul told a story about how during one of his workshops a woman walked out and he could see her outside the room angrily pacing back and forth. he said when she came back at the end of the workshop she told him how much he challenged her beliefs about how yoga “should be.” let’s just say that Iyengar yoga purists and Paul usually don’t see eye to eye. killing sacred cows can be a hard thing to do but someone has to do it.

I’ll leave you with a question that Paul asked us. it has to do with the physicality of yoga, with the ability to “advance” in the asanas:

How would it affect your practice if you would never get “better” in yoga? how would that affect you emotionally? once you hit that wall of never getting “better”, would you shift your emphasis away from the physical to the energetics of yoga?

He used me as an example again. he said, “Linda has been doing yoga a long time. you’ve seen how flexible she is. do you really think she does yoga to become more flexible? there has to be something more.”