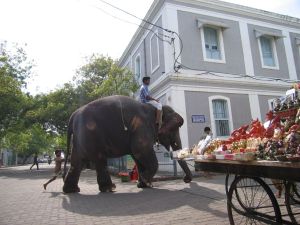 My first weekend in India, outside of Chennai, left me with a very different feeling this time as compared to last year. I told my friends that India is different this time, there can never be another “first time in India”.

This time I feel a bit jaded. Last year I thought everything was wonderful — this time I can see the shit on the streets, notice all the starving dogs and the beggar girls. But that is reality, all things change, nothing remains the same.

Just like last year, my first trip outside Chennai was to Pondicherry, the city where the French tried to get their teeth into India before the Brits kicked them out. I tried to get a room at the Park Guesthouse, where I stayed last year, which is run by Auroville, the ashram of the late Sri Aurobindo and The Mother. Was told “no rooms”, yet the couple who came in behind me got a room. I was told later by a woman from New York who now lives in Pondy that the Park is “funny” about a solo woman showing up asking for a room. Ended up at the Hotel Soorya…for only one night, it was fine….500Rs, a little over $10…..

Spent lots of time at the Ganesha temple this morning, saw the puja with the temple elephant. Yet the people in the stalls outside…..people asked me for pens, pens, pens besides money, money, money. The temple’s shoe man (who watches your shoes when you go into the temple) told me his daughter studies in Chennai, he wants my “best pen”. I gave him a pen I had. Later on, as I came out of the temple he tells me “pen no write”. I told him “your karma, boss. Chennai man give me sandlewood pen last year, fell apart, cheap. karma is karma…..om gum gana patayai namaha….”

Something about Pondy this time just seems so…..mean and hard, can’t describe it. I’ve been walking around for hours now and I keep thinking, why does everyone look so pissed off? No smiles. I stopped at a chai bar on the beach and told the clerk how great I thought the chai was (it was! all for 3 rupees!) and the look on his face would have melted glass. Walked around the market streets, and all I saw was….America. American clothes, American plastic shit, American money-grubbing.

On the bus to Pondy I sat next to a Muslim man who kept offering me candy, he was great, so open so friendly. On the other side was an Indian woman who spoke excellent English so we talked about spirituality when she found out I teach yoga. She said she had done yoga a long time ago and wants to get into it again. I said, but you have the best yoga schools here, Westerners come here to study yoga but Indians don’t do yoga here. She said that’s because we don’t appreciate it. She said it was her karma that she sat next to me because I have given her inspiration to start doing yoga again.

Then she started talking about America and Bush. I am sick of people asking me “do you support George Bush?” I said, no, you can’t blame me for him, because I did not vote for him, twice! I told her not to judge America or Americans by George Bush. I told her, if you do that, you are no better than Americans who judge India and Indian people by the pictures of filth, poverty, and beggars that they see, they think all of India is like that. So how can you judge America by George Bush? I told her, you talk about spirituality, but you have one opinion only about America because of what you see in the press? She apologized to me, said I had opened her eyes about her own closed mind.

Unless anyone think I am dissing Pondy, I’m not. It was just different this time. I stood on the rocks by the sea this morning looking down at all the garbage as I drank my chai. Last year I thought “this is India, it is what it is.” This morning it disgusted me — I thought, doesn’t anyone care what they are doing to the ocean, to the environment? Then a man walked up next to me with a plastic bag with something long and oval looking in it. He made sure that when he threw it, it landed in the ocean. He walked away without a second thought. I thought about what it might be: garbage, or a cat, a puppy, a baby, maybe a girl baby? It did not float, it sank immediately.

I would not be a clear-eyed Buddhist if I did not see things as they are, not as I wish them to be, without the garbage and the starving pups and the big-eyed beggar girls. It is what it is. And I absolutely believe that the people are friendlier in Chennai than they are in Pondy! Even the Westerners in Pondy all looked like they were pissed off….

On the bus trip back to Chennai two men helped get me to the right city bus stop to get me back to my hotel and I did not have to ask them for help….they only asked if “American madam” needs help….

Ah yes….. while my fellow students were lounging all weekend at Ideal Resort, a beach resort in Mahabalipuram, I was watching men shit and piss next to the road on the way back from Pondy…..the “naughty stop”!.

On the return trip from Pondy, the bus made a “rest stop” between Mahabalipuram and Chennai. The bus stopped at a grove of what looked like pine trees, lots of space in between each tree. Also lots of garbage, crows, dogs, and a few cows. Most of the men got off the bus, and started to shit and piss in plain view. Too bad for any women on the bus who had to relieve themselves! I watched this unphased, I did not look away. The man next to me, who I noticed was dressed all in white, looked embarrassed that I was witnessing this. He clucked his tongue a few times, waved his hand toward these two legged dogs, and said “naughty stop”. “Sorry?”, I said. More tongue clucking…..”naughty stop” he repeated and shook his head. He looked mortified that I was seeing all this, and that we were in plain view of the road, with cars, buses, and rickshaws speeding by….

this is India, darling…..