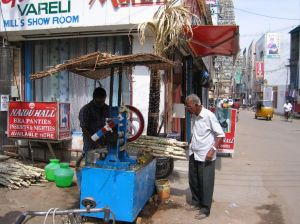 My last day in Madurai was uneventful and actually a bit relaxing. I spent the last day on a city tour, going from an old palace to some small temples and a return visit to the Gandhi museum.

The bus picked me up and stopped at other hotels along the way picking up other passengers. An Indian tour bus (or a city to city bus) is usually not decked out with plushy seats, air-con, and a restroom in the back – most of the seats were ripped and frayed, but they were adequately comfortable. Sometimes you have the pleasure of listening to music played full blast through a shabby speaker that is circa 1970, driver’s choice of music, of course. And don’t ask about a rest stop. I settled in and waited for the day’s adventures.

Once again, as is so common during my trips, I am the only westerner on the bus, and I love it this way. Indians stare at all foreigners, that’s just the way it is, and if you are uncomfortable with being stared at everywhere you go, don’t go to India. But I was dressed Indian-style, and after I got the once over (or twice over or thrice over), I found that Indians generally left me alone (except in Kodaikanal, but’s that’s another story, stay tuned.)

I love watching group dynamics so I watched everyone get on the bus – young couples, parents with kids, seniors. It was funny seeing almost everyone have the same reaction to the condition of the bus. They walked up the stairs, stopped, looked around at the frayed seats, either gulped or sneered, especially the travelers who looked more “upscale”, then took a seat. Off we went, all windows open to the Madurai heat and dust.

I really don’t remember exactly what was on the tour. I just enjoyed being out riding around with a bus load of Indian tourists. The driver did not speak English, so every time we stopped, he would announce in Tamil what we were seeing and how long we would be there. At the first stop I asked him how long and he just looked at me and grunted. I was on my own – I had a feeling that if I didn’t get back to the bus in time, he’d leave without me, wherever we happened to be. Finally a man told me in English “20 minutes”, and at every stop I would look at him and he’d smile and tell me how long we’d be at the stop.

Everywhere we went, I loved the vignettes that were framed by the bus window, glimpses of Indian life. Sometimes I was lucky enough to snap a picture, but there were many that I wish I could have gotten – the huge ram with massive curled back horns sleeping peacefully in the gutter while a woman swept the street around him, not disturbing him; two flower sellers with their carts, talking quietly, engrossed in conversation as only women can be, as a street goat happily munches the day’s profits from one cart. Thinking of those scenes now make my eyes tear up because I miss India…

It was a lazy day and the only excitement we had was when the driver took a curve too fast and I literally felt the tires on my side of the bus lift off the ground for about three seconds. People started yelling at the driver and the woman next to me flew out of her seat. She would have landed face-first in the aisle had I not caught her sari and pulled her back down. My reaction to this was total equanimity — I shrugged it off, and went back to staring out the window, listening to the other passengers yell at the driver. I must learn more Tamil!

At one stop we were besieged by begging children, girls and boys. On my trips I saw that Indians do not usually give to beggars, so anytime they see a foreigner, it’s a no holds barred onslaught of constant cries for money. Trapped on a bus, I was ripe for the picking.

Some of us were sitting on the bus waiting for the others. I was sitting next to the middle door so it was the perfect place for one girl to plant herself on the steps in front of me with her hand out with a constant call that sounded like “ma” over and over and over again.

In India, you have to develop a hard skin and pick and choose which beggar you will give to, if at all. Right then I was not in the mood, so I ignored her constant cries and stared out the window. Occasionally I would look at her and shake my head and tell her no in Tamil, but she never stopped. Every Indian also ignored her, staring out the windows. Finally I got an idea. I saw how Indians rarely give money to beggars so I pointed to each person on the bus and told her “ask him” or “ask her” and rubbed my fingers together, the universal sign for money. I said, “they give rupees, I give rupees”. She left me, and went over the Indians. AH! That finally got everyone’s attention, and once she started harassing the Indians, a woman said something to her and the girl left the bus. We finally left and I looked back to see the children swarm the next group of tourists…..

One of the last stops was the Gandhi museum. This was late in the day and people were feeling tired and hungry, they moaned and groaned and really did not want to get off the bus. By this time I surmised that many of the passengers could understand English so I said that I had already been here, and it’s not to be missed. That perked everyone up and with big smiles most got off the bus. Some of the women didn’t, and the driver pulled the bus underneath a tree for shade. We could have stayed there the rest of the afternoon, that’s how peaceful I felt at the museum.

I got off and walked to the little book stall. The old clerk remembered me, gave me a big smile and put his hands together for “namaste”. He gave me more pictures of Gandhi, which he had also done the day before. I walked to the chai cart and ordered three cups of chai. An older couple said hello to me, asked where I was from and what I did, and we chatted for a while. I found out later that yoga classes are conducted at the museum. Mmmmm…if I lived there…how sweet that would be to take or even teach yoga at place dedicated to Gandhi….