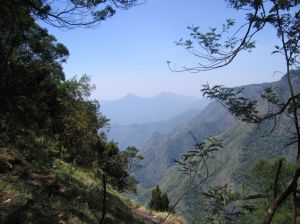 I hired a car to tour the local sights on my second day in Kodai. I can’t remember the names of where we drove, but most of the spots would be called “scenic overlooks” or “nature viewing areas” here in the US – and also one golf course, where the only golfers I saw were the monkeys cavorting on the greens. I thought it was interesting that a golf course would be a feature included in a sightseeing tour. At least I was impressed with how lush the grass looked and they probably did not douse it with lawn chemicals like in the US. Unfortunately this little sight-seeing expedition was where I experienced my first taste of Indian nastiness.

The driver dropped me off at Coaker’s Walk, a path that winds up and around a hill where on a clear day you can see all the way to Madurai. My driver said he would meet me on the other end. It was a beautiful day and I started walking slowly, enjoying the views, stopping to take pictures. The view was fabulous and the air smelled fresh and green, really the first time I smelled “green” in the air in India. Couples and families were walking around, and as usual, I was the only westerner. About half way through my walk, two youngish couples walked toward me, they were maybe mid to late 20s. They slowed down, stared at me, then pointed and started to laugh – at me. I stopped and looked behind me, thinking someone behind me was acting goofy. It never dawned on me that I was the one they were laughing at. It wasn’t just a guffaw or two, it was a steady stream of laughter and talk amongst themselves.

I knew that Indians stared at foreigners especially ones dressed like a “typical tourist” (imagine a man with snow white legs sticking out of khaki shorts wearing white socks with sandals or a woman wearing tight, revealing clothes), but I was wearing loose cargo pants with a traditional kurti, nothing strange about my clothes at all, I wasn’t showing any ankle or shoulder. At first I thought the way these people were acting was strange, then my blood began to boil. I walked past them, then turned around and confronted them. If you ever saw the movie Taxi Driver, I did a Travis Bickle. I yelled, “You talking to me? I said, ARE YOU TALKING TO ME?” They stopped pointing and laughing and just stared. “What’s your problem? You got a problem? The hell you looking at? Why don’t you take a picture? You want a picture? Here I am!”, I continued to yell non-stop. They turned around and walked away, probably grimacing when my south side Chicago accent hit their ears. I truly hoped they thought I was a crazy American woman and would tell all their friends about me.

My equanimity immediately flew out the window which told me how much farther I have to go on the Path. Calm down, I told myself, but I was almost in a rage because I could not believe people could be so cruel and ignorant for no reason. How dare they. What the hell did I do to deserve that treatment and who the hell did they think they were? In my old neighborhood on the south side of Chicago their behavior would have gotten them a rightous ass-kicking, including the women. The same IndiaMiker who told me about the Kodai tribals told me that “Kodai gets a lot of young tourists, who now have lots of money and lots of confidence. I imagine that the people who were rude to you were the young smug newcomers to India’s middle class–software, call center types, trying to impress their girlfriends/wives. Rather like the jaded Upper West Siders of New York sneering at the tourists in Times Square.”

Their actions (well…my reactions to their actions) totally put me off the rest of my walk and when I got back to the car I took it out on my driver. I asked him if it was common for Kodai Indians to treat tourists like I was just treated. I asked him if people here were always so mean. “What’s wrong with you people?”, I asked him. He acted like he did not understand me, but I knew he did, and we drove to the next stop.

I started feeling better when we drove to waterfalls and into some pine forests. Nature has always been my church and sanctuary. I’ve hiked the Rocky Mountains in Colorado and the Sangre de Cristo Mountains in New Mexico, canoed in northern Minnesota. But when I got out of the car and started walking with other tourists in these natural areas, I was struck by how the Indians treated these areas as if they were in an amusement park. These were the most pristine areas I had seen during my India trips, but the ground was littered with empty film canisters, film boxes, and other non-biodegradable trash. I didn’t understand it at all. These hills were beautiful, but there was no awareness or care whatsoever.

We drove to another overlook where there were lots of monkeys and lots of people because tour buses were dropping off their passengers. The monkeys – well-trained to get close because people would throw them whatever food they had – were running all over, but as soon as they got close, someone would throw a rock and then run away – yeah, real macho guys. I almost got knocked over some boulders by idiots throwing rocks at the monkeys and then running away from them. The women would also run away from the monkeys, screaming. What was wrong with these people, why don’t they shut up and enjoy the view, why are they hassling monkeys? The eyes of the monkey in my photo in the previous post say it all. I would try to take a close-up picture of a monkey and some moron would walk in front of me, totally clueless. I finally got so sick of what was going on around me, I sat on a rock and started to egg the monkeys on, out loud – “go ahead, get him; go ahead, bite him, bite his hand”. I knew that some people could understand English and I didn’t care. I was hoping that a monkey would get really pissed about getting hit with a rock and just go ape shit on somebody (sorry, just had to say that.) I was out of there – the whole day made me wonder why I ever wanted to go to Kodaikanal. There was nothing here for me, and my claustrophobia crept in again. It was the first time that I truly felt alone in India.

There were a few more stops and the driver left me at the hotel. I beat myself up for not going to Palani instead to visit the great Murugan temple. I spent the evening wandering around Kodai, eating Tibetan food, drinking chai, going into all the stores. I slowly walked the 3k around the lake back to the hotel. I could not wait to get out of Kodai.

Early the next day I left for Rameswaram, where I would lose my heart to India all over again.