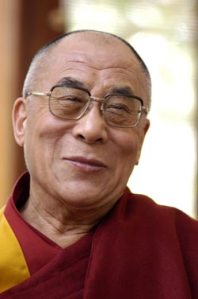 This is my simple religion. No need for temples. No need for complicated philosophy. Your own mind, your own heart is the temple: your philosophy is simple kindness.” HH THE DALAI LAMA

“SECURITY surrounding the Dalai Lama has been tightened after reports of an attempt by the al-Qa’ida-linked terrorist organisation Lashkar-e-Toiba to assassinate the exiled Tibetan spiritual leader.

A three-tier security ring has been thrown around the 72-year-old Buddhist head, who lives at Dharamsala, in the Himalayan foothills, Indian police spokesman Prem Lal said.

All those approaching the exiled Tibetan chief will be closely watched by highly trained Tibetan security guards as well as heavily armed deployments of Indian police.

Visitors are being body-searched before being allowed to approach him.

…In a recent document, Osama bin Laden denounced “pagan Buddhism” as part of his general attack on anything not Islamic…“

“Reports galore in the media about a possible assassination attempt on the Dalai Lama by Pakistan based militant group Lashkar-e-Taiba (LeT).

‘Mahatma Gandhi Tibet Freedom Movement’ activists accused China of being behind the threats. They shouted slogans against and burnt posters of Chinese President Hu Jintao…”

Reading the articles about terrorist threats of assassinating the Dalai Lama sickened me. They scared me and made me very sad — I am less than one month away from spending three days listening to His Holiness’ teachings.

I’ve always believed that there is a huge difference between religion and spirituality. I was raised Lutheran — not exceedingly so since I was never confirmed and did not go to church every Sunday, but often enough — but even as a young child I never bought into the concept of “religion”, something that is man-made, a concept that is surrounded by the four walls of a building. Growing up I saw too much hypocrisy from too many so-called “religious” people, so I decided “religion” wasn’t for me.

But “spirituality” was. Nature was always my church and being outdoors gave me the feelings being in church never did (or was supposed to.) Connecting with the Earth, noticing a tiny hummingbird nest holding tinier eggs, watching a butterfly tentatively emerge from its cocoon, always filled me with a spirit that going to church never could…that there is something greater outside ourselves and it is useless to try to put a name to it and to try to mold it to our own images of ourselves. It just is.

Buddhism is a philosophy to me, much more so than a religion. The rituals and temples are what make Buddhism a religion; the Noble Eightfold Path is what makes it a philosophy, a simple way to live your life.

As one of my teachers said, “we are more attached to our ideas than to our own bodies” — meaning that we will destroy ourselves over an idea, whether it’s forcing our body to get into that “perfect” yoga pose but knowing full well that one more headstand is going to crunch our C7 vertebra…
or whether it’s flying a plane into a building, driving a car bomb into an embassy, or someone risking his life to kill the Dalai Lama. Go back and re-read bin Laden’s words, and then re-read the Dalai Lama’s words at the beginning of this post.

Please meditate on loving-kindness for yourself, for the people in your lives, and for the entire world, for all sentient beings. May you all be well and happy and peaceful.

I’ve included a new feature on the sidebar, “News from Tibet”, streaming headlines from Tibet that are updated daily. Click on the links to get the latest on conditions in Tibet and the Dalai Lama.

3 thoughts on “"my simple religion"”