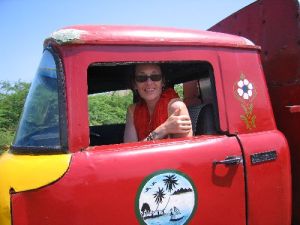 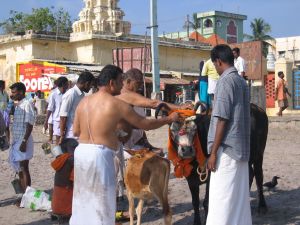 Kannen and I walked to the ends of Dhanushkodi, almost to Sri Lanka, in the noonday Indian sun, but I was too hot and too exhausted to walk back to where we had started. I opted for the 30 rupee truck ride back. Other people joined us in back of that truck and at one point we got stuck in the sand — we all got out and the men pushed and pulled the truck until we were free. Using the rope that was tied to the top of the truck, I grabbed it and swung myself back up, enjoying every moment of the ride back. I did not understand a word anyone was saying, but I felt comfortable, never out of place in the back of an old truck on a beach in India.

My right-out-of-the-ocean fish lunch was waiting for me – and for Kannen, of course, since I paid for his lunch and the ride back – and it seemed to me that I had never had a more delicious meal. Sitting at the fisherman’s makeshift lunch counter in front of his open fire, I watched him cook as his daughter cleaned the planks that were used as seats and tables. Kannen told everyone that I was an “American yoga teacher” and everyone smiled and nodded their heads and asked me if I liked India. “I love India!,” I said, and that brought even bigger smiles. One Indian showed me his Bible and asked me if I knew Jesus. I told him that I certainly did know Jesus and the man was satisfied with that, he did not try to convert me. When we left, the fisherman asked me to stay in Rameswaram to teach his daughter English. I laughed and told him I would if he could find me yoga students. If only I could have stayed…

I got back to my hotel and that night Kannen and I walked to the great temple. The Ramalingeshwara Temple was built in the 12th century, and has magnificent pillared walkways, 1,212 pillars on the north and south sides. This temple is different from other temples as it is a temple for worshipers of both Shiva and Vishnu. The temple contains 22 temple tanks (like wells) each with water where one can “bathe”, that is, three buckets of water from each tank are poured over you by a temple attendant. Each tank is said to have special benefits: one gives you relief from debt, one gives you “complete wisdom”, one gives long life to a woman, and other things. I was to go through this dunking early the next morning.

Kannen and I sat and talked for a long time. Once again, as in all my travels, I was the only westerner. We sat by a tank where a man was pouring water over a boy and Kannen pointed out that was what I was going through tomorrow. I felt very much at peace in this temple, I felt like I could have slept there all night. Kannen told me about his life, his children, how his sister lived in Germany, how he likes meeting so many people from all over the world. He said he would arrange for my bucket ceremony. He told me it would cost 300 rupees, which I knew was a scandalous rip-off, but I did not care. I saw what the price was on the sign outside the temple and the cost was at least three times less than that, but I also knew that prices are automatically increased for foreigners. Besides, when would I be here again?

Kannen picked me up at 6 AM the next morning. We walked to the temple and I met my “bucket man”, a friend of Kannen’s (of course.) We stopped at each tank with the rest of the pilgrims and my man would put the bucket in the tank three times and pour the water over my head. However, he was practically running from tank to tank! I figured he was thinking, OK, I got my money, let’s get this show over with, and I told him to slow down, that I did not want to fall because the floor was sopping wet from the dripping clothes of all the people. He got the hint and we walked a bit more reverently. I was going to take as long as I could to get through all 22 tanks. I noticed that one tank was all about Brahma and it said that water from this tank would extinguish my past karma…I liked that. I must say that I did feel a bit more cleansed after that bucket of water washed over me.

The last stop was going into a temple room with other women where I wrung out my salwar kameez before meeting the temple priest for a puja. I bought flowers and fruit and made him an offering; and he then smeared sandalwood paste on my forehead, blessed me, and gave me a packet containing “temple things” including a little container of temple water.

I was done. My bucket man had disappeared, my 300 rupees in his pocket together with a new pen. I think he appreciated the “new pen” more than the rupees. I found my sandals and started to walk back to the hotel, knowing that I was in a different state of mind.

I slowly walked along the beach, stopping every so often to watch the pilgrims bathing in the ocean before they walked into the temple. Halfway to the hotel I looked up and saw Kannen walking toward me. “You look beautiful,” was all he said.

He told me to rest, to not take a shower for a few hours, that I should just let the energy from the temple water soak into me. My train to Chennai was leaving at 3 PM, and he said he would come back to take me to the train. “Beautiful,” he said, as he walked away.