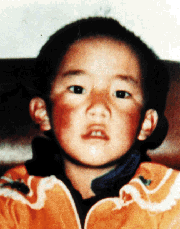 “In May 1995, Chinese occupying forces abducted the six year-old Panchen Lama from his home in Tibet. No one there has seen or heard from him since. His abduction was a crime not only against an innocent child, but against the Tibetan nation and its way of life.

The whereabouts and welfare of Gedhun Choekyi Nyima are still unknown more than 11 years since he was abducted by the Chinese authorities. China defied numerous calls on the case, including one from the UN Committee on the Rights of the Child to “allow an independent expert to visit and confirm the well-being of Gedhun Choekyi Nyima whilst respecting his right to privacy, and that of his parents”.

Despite additional calls from the UN High Commissioner for Human Rights, Louise Arnour, and the UK through the EU-China and the UK-China Human Rights Dialogues, China maintains that ‘the so-called Panchen Lama was a normal child, leading a healthy and happy life.'”

Help free the Panchen Lama by signing this petition

For more information about the Panchen Lama, read this post by my gal pal in India, Sirensongs.

BOYCOTT THE 2008 OLYMPICS IN BEIJING

One thought on “help free the Panchen Lama”