whew! I returned from India about 12 hours ago sicker than a mangy Indian street dog. I’ve had food poisoning for the past 6 days from a “jam cake” that I ate in Fort Cochin. I am amazingly svelte — eating nothing but 2 slices of bread, 2 bananas, and water each day for the past 6 days does wonders for the figure, however, my face is very ashen and gaunt. Oh well, it’s that heroin chic Kate Moss look.

Thanks to my network of friends in India I was taken to a hospital for a “drip” (what they call an IV infusion) of glucose and salt just to help get me on the plane for an 18 hr. flight home. It’s good to be home in my own washroom….:)

what a long strange trip it was! It was a very different trip for me this time physically but especially emotionally. I experienced the beautiful and the terrible of india, but hey, that’s india….both enthralling and repulsive all at the same time.

one of my teachers at the school told me that I’m a native now — that the first time you go to india one is scared and apprehensive; the second time you’re in india, you love it, you want to stay forever, nothing is ever wrong; the third time you begin to see things as a native does, the good, the bad, the horrible, the indifferent, india with its warts and all. what I found amusing this time around was that instead of asking me “what country, madam?”, people asked me, “do you live here, madam?” I’ve arrived.

india never fails to make me rethink this suburban life — if people here only knew what goes on in the rest of the world, maybe they would appreciate what they have. Yes, people have it bad here, but I would rather be dirt poor here in the United States than anywhere else in the world. If you want to live a Hurricane Katrina experience EVERY SINGLE DAY OF YOUR LIFE WITH NO GOVERNMENT ASSISTANCE, be a slum dweller in India. so quit your moaning and belly-aching about what you don’t have like those hand-painted yoga pants or the latest yoga book or that eco-conscious yoga mat. I was with slum children in Madurai, India who have nothing compared to many American children, yet they had the biggest smiles for me.

my favorite experiences of the whole trip was my serendipitous visit to a slum school where I was the “guest of honor” and my dancing with tribals at a Pongal (harvest) festival at an Indian village outside of Madurai. I took two train trips and a four hour bus trip through the back roads of tamil nadu where I swear I felt something run across my foot. I discovered that four hours is about my limit on an Indian country bus, especially when one has to listen to cheesy Tamil videos from the 1970s played at full-blast.

but here are some pictures from tracy . You may recall that she was collecting shoes for the street kids of Mysore, India and I sent her three boxes of shoes that I collected at my former yoga studio. I also sent her my own baby shoes from the 1950s and requested that she take a picture of the baby that they went to, so here are the pics: 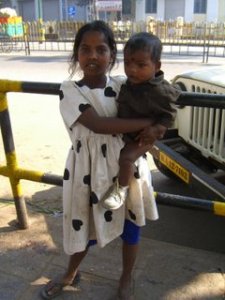 wow. my baby shoes from the 1950s now worn by an Indian baby. incredible. incredible india. thanks, tracy.