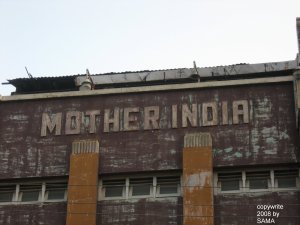 “In some ways, India is like another home. There’s a familiarity of myself here. It’s the rawness of life that resonates with me, in its myriad forms – beautiful, grotesque, otherworldly. The systematic stripping away of distractions and compulsions; attachments that keep us from being fully present.”

This is what Barbara Raisbeck has to say about India in her blogs The Daughters of India and India in Stories. Go to her blogs to read the rest of the above post and her other powerful stories. When I got her email with this post the above words resonated with me very much because I feel the same way. I’ve said before that as soon as I put my foot on Indian soil in 2005 I felt like I had come home.

Barbara is another woman I’ve come to know online through the website IndiaMike.com although we’ve never met. She is in India again right now doing research for a book on dowry brides.

My trip this time was a very mixed bag. As I said previously, one of my teachers told me that on your third trip you become a native, seeing India for what it is, warts and all. Well, I saw plenty of warts, my own included. India is always the country that attracts and repulses you all at the same time. Just when India drop-kicked me in the head, another wonderful moment occurred just because I happened to be in the right place at the right time (I’ll write about it later.)

I read a story before I left about a baby elephant that was rescued. A baby elephant had fallen into a pit in the forest and the mother and the rest of the herd tried to rescue him. After awhile the herd left, but the mother stayed there trying to rescue her baby, with “tears streaming down her face” the article said. The villagers saw this and called the Forestry Department who sent a working elephant and a vet. The mother elephant would not let anyone near her baby, who by this time was not moving, so the working elephant with her mahout kept the mother away while the baby was pulled out of the pit. When the vet treated the baby, it was discovered that the baby had also been stung by a scorpion, that’s why he was not moving. The article said that after treatment the baby would be released back into the forest. Definitely a feel-good story.

Compare that story to the one I read about a Chennai hospital that was being investigated because they threw a patient, still connected to tubes and IV bags and a urine bag, out into the street. Imagine walking along and seeing an old person in hospital clothes still connected to tubes and bags just lying in the street outside a hospital. The article said that the patient was indigent, that no one claimed any responsibility for this person. In other words, the hospital was not going to be paid for treating this person, so they threw the patient literally onto the street. The article said the hospital was being investigated but I noticed there was no mention of what happened to the patient, whether he had been taken to another hospital or what.

Over breakfast one morning I read another story about 13, 14, and 15 year old girls being raped by their husbands. In the Chennai area there are still tsunami camps, refugee camps where people still live despite the tsunami happening in December 2004. Mothers fear for their daughters in these camps so they think if they marry off their daughters, the new husbands will protect them from the unwanted advances of men. However, given that these young girls know almost nothing about sex, they refuse the advances of their new husbands, so their first experience with sex is rape. I read how one young girl was drugged into unconsciousness so her husband could have sex with her. These girls of course become pregnant and have babies at these ages, in a refugee camp. And the cycle continues. Lovely breakfast reading.

For every story like the first one, there are two or three of the other.

There are still people who think India is the land of yoga, incense, and spirituality, some romantic place where one only needs to travel to the Himalayas to find their guru and nirvana and all their problems will be solved. If you read an Indian newspaper every day I can assure you that your rose-colored view of India will change. I am reading a book right now called Children of Kali and the author says that India is very good at exporting spirituality and gurus, but doesn’t have the guts to look at its own problems.

Like anywhere else, India has its angels and its devils. I’ve met the friendliest and kindest and most gracious people in India but I’ve also met the most arrogant and the most rigid. I’ve met people who could not think outside the box to save their own lives.

But the thought of never returning to India kills me. I came back this time sicker than an Indian street dog with the thought that I will take a break from India for a while. But as soon as I started to get my strength back, I started having Tamil Nadu dreams again.

What keeps drawing me back? I can honestly say that I don’t know. Maybe it is the rawness and the grotesqueness that Barbara writes about that keeps bringing me back. Maybe it is those 4 hour bus rides through the Tamil Nadu countryside that I said I would never do again, but that I achingly miss right now. Maybe it’s those fleeting moments of human connection with a total stranger, no words spoken, but completely understood via a smile and hand gestures and the eyes and the head wobbles that have settled deep within my heart.

India has her hooks in me like an old lover — an old lover who you’ve told yourself that you never want to be with again but who keeps re-appearing like a hungry ghost tapping on your shoulder, and no matter how fast you run you can never escape him because he is a part of you forever.

You know this and you hate it but you love it all at the same time. I have no answers, but Barbara comes close….

“The only way I can answer is, in suffering, in our own or being a witness to it, there is an opening that occurs. That opening can consume or liberate us. Or both. Consume, then liberate. And just at the moment that we think we’ve been liberated, the consumption starts again. The suffering doesn’t just end, even when we beg it to. But I have learned that to observe it, allow myself to feel it, hold it, accept it, I can then let go of it. Not completely since our wounds leave scars, but enough to help me out of the fire and into the awareness of the lesson, that will, when I am ready, appear and show me a way through to the other side.”

6 thoughts on “the dichotomy that is India”