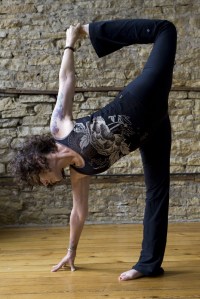 I’ve written before about how according to Yoga Journal the only good yogi is the young, white, skinny woman sans cellulite and wrinkles. Two years ago when I was 53 I wrote this post about American yoga and ageism. So I was glad to see the latest issue of YJ devote a few pages to American yoga’s spiritual elders: Patricia Walden, 62; Gurmukh Kaur Khalsa, 67; Sharon Gannon, 58; David Life, 59; Angela Farmer, 71; and her partner, Victor van Kooten, 69.

Like the older yogis in the latest YJ, my yoga practice has also changed the older I’ve become. I wrote this post asking people to get real about their practice if they’re in their 40s, or 50s, or 60s. No offense to the young teachers out there — we all start out green and we can and do learn from everyone no matter the age (I have a 17 year old student who has been with me for three years and she’s a joy)…but I’m just not drawn to a younger teacher. Go ahead and call it reverse-ageism if you want to (I’m too old to care.) I am certainly not saying a young teacher does not know anything or that I know more or that seasoned people like me know everything. I’m saying that there is much to be said about life experience. It’s not all about what you read in the yoga books. I did not become a yoga teacher until I was 48 and frankly I am very grateful for that because for me the difference between 28 and 48 is not just 20 years but light years. You’ll see. Maybe it’s time that younger teachers start listening to us crones in our 50s and 60s. It’s good to be a crone.

Not only my own practice, but my teaching has changed. I used to feel that I had to keep people entertained and like Angela Farmer, I also feel the atmosphere of a class. I want people to intuit their own practice and get out of their heads and into their bodies, I don’t want students to mimic what I do. The longer I teach, the less I demonstrate, the more I walk around the room, even with beginners. I hate routine, one foot has to be this way, the other that way, the arms have to be here or there. How boring. How rigid. How dull. That is yoga prison to me. I choose to be a rasa devi and move in and with passion.

Fancy arm balances and pretzel poses no longer impress me. Show me how you live your life and what you can give up for 10 days at a retreat without complaint — that will show me what you’ve learned from yoga. Show me your service and gratitude.

I live with chronic pain nowadays and like Buddha said, there is no escaping old age, sickness, and death. Yoga and my spirituality has made me comfortable with it all, even the thought of death. During meditations I’ve had visions of myself of what seems like 20 years from now — I now know where that place is, where I will be. Just burn this crazy old yogini’s body and throw my ashes in Ma Ganga. I will have been grateful for it all.

14 thoughts on “age before beauty”