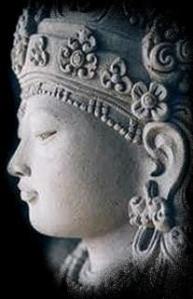 Prajnaparamita
(The Prajñāpāramitā Sutras are a genre of Mahayana Buddhist scriptures dealing with the subject of the Perfection of Wisdom.)

Brenda Feuerstein was kind enough to give me permission to publish this article by Georg Feuerstein. Georg has authored over forty books including The Shambhala Encyclopedia of Yoga, The Yoga Tradition, and Yoga Morality. You may also know Georg and Brenda from their Traditional Yoga Studies website: “Traditional Yoga Studies (TYS) is dedicated to promoting authentic yogic teachings based on scriptural and oral transmission, as well as solid research, and to bringing out their relevance at the present time of severe environmental and social crisis.” You can visit http://www.traditionalyogastudies.com for distance learning courses on:

Brenda also told me that they have received an anonymous donation and have decided to pay it forward and give away 10 partial scholarships for their 800-hour Philosophy, History and Literature of Yoga Course. Applications are due by the end of January 2010. If you interested in applying for the course scholarship program which is 50% off the regular price ($600.00 off), you can email Brenda the following information: full name and mailing address, email address, and tell them about yourself, why you want to study the course, and why you require a scholarship for the program.

In light of reader comments on my last post, I thought Georg’s article was especially timely.

Everybody talks about practicing Yoga. Few Westerners talk about studying it, and many believe that the study of Yoga is unnecessary and even a waste of time. They like to quote Sanskrit sayings about the uselessness of book learning. These are typically taken out of context, and other, more pertinent statements are either ignored or not even known.

Then, again, there are those who—like the majority of academics—maintain that one must understand Yoga objectively and that by practicing it, one automatically jettisons any claim to objectivity.

Both attitudes are wrong. The belief that studying Yoga is redundant is self-evidently mistaken, because unless we know what we are practicing, we cannot really hope to be successful in our practice. This is like wanting to build a computer without expert knowledge of its component parts and how they interact. Perhaps a more pertinent example would be to want to remove a brain tumor without any medical knowledge and surgical skill.

“From study one should proceed to practice (yoga), and from practice to study. The supreme Self is revealed through perfection in study and practice.”

The belief that objective knowledge is possible and highly desirable is just that: a belief. Philosophers have considered at great length whether the common ideal of scientific objectivity is in fact possible, and many have come to question this. Many have, in addition, expressed doubt about whether such objective knowledge, even if it were possible, would be desirable. Their thoughtful works are readily available, and so I won’t argue this point here.

My present focus of attention is on the study of Yoga, which tradition tells us is indeed essential to success in the practice of Yoga. Study is treated as an integral aspect of Yoga practice. Thus, Patanjali lists study as one of the five aspects of self-restraint (niyama), the second limb of his eightfold path.

The Sanskrit word for study is svādhyāya, which means literally “one’s own (sva) going into (adhyāya).” It stands for the serious and systematic study of both the Yoga tradition and oneself. Both knowledge of the tradition and self-knowledge go hand in hand.

The traditional scriptures contain the distilled wisdom of sages who have climbed to the pinnacle of self-knowledge, and therefore these texts can contribute to our own self-knowledge. Study, in the yogic sense, is always a journey of self-discovery, self-understanding, and self-transcendence.

Yoga does not call for blind faith, though it stresses the superlative importance of real, deep faith (shraddhā), or trust. Mere belief cannot help us realize that which abides beyond the conditional or egoic personality. Instead, Yoga has always been intensely experimental and experiential, and study is one aspect of this sound approach.

Many Western Yoga practitioners, especially those with a dominant right brain, shy away from study. They much rather polish their performance of this or that posture or, more rarely, learn a new breathing technique. Yet, it would seem they often miss the mark, because they do not know the proper context in which these techniques must be cultivated. The state of Hatha-Yoga practice and teaching in the Western hemisphere is a good case in point: What was once a profoundly spiritual discipline has been demoted to physical health and fitness training. [emphasis supplied.]

Often Western Yoga practitioners do not even have an accurate knowledge of the techniques themselves. They sometimes seek to compensate for their ignorance by trying to reinvent the wheel and by producing their own versions of yogic practices. While innovation is commendable — our whole civilizational adventure is based on it — in the case of Yoga, we would do well to be modest. After all, the Yoga tradition can look back upon the accumulated wisdom of at least 5,000 years of intense experimentation.

Just as a predominantly right-brain (action-driven) approach to Yoga has its pitfalls, a purely left-brained (thought-driven) approach is equally precarious, if not altogether futile. “Armchair Yoga” cannot replace actual experience.[emphasis supplied.] If our practice is merely nominal, so will be our attainments. In Yoga, both theory and practice form a continuum, like space-time. It requires from us a full engagement, as the Buddhists put it: with body, speech, and mind. Yoga, as the Bhagavad-Gītā (2.48) reminds us, is balance (samatva). Hence we ought to engage both cerebral hemispheres when applying ourselves to the yogic path. Let us also recall here that one of the meanings of the word yoga is “integration.”

An ancient scripture, the Shata-Patha-Brāhmana (11.5.7.1), declares that, for serious students, study is a source of joy. It focuses the student’s mind and allows him or her to sleep peacefully. It also yields insight and the capacity to master life. What more could one ask for?

Copyright ©2009 by Georg Feuerstein. All rights reserved.
Reproduction in any form requires prior permission from Traditional Yoga Studies.