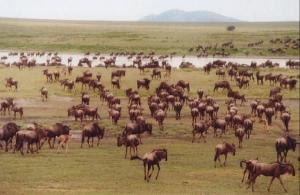 “We are not separate;
we cannot be separate from Nature,
which sustains us in a vast interdependence with everything.

The universe comes perfectly
and is awesome in its integration and infinite existence.
It is our natural state.”  (Mark Whitwell)

There are certain images in my head from my trip that are still affecting me.  It was such an amazing adventure that words are much too puny a mechanism to try to describe what I experienced, so don’t expect a travelogue.  But I truly came to know what the spiritual adept told me last year when she said I would die in India and be reborn in Africa, because it happened, just like she said.  A holy man I met at the Mela, purely by chance — no, it was my good karma — changed my life forever.  Just as she foretold, the old me died.

The photo above is not one of mine, those will come later.  But it is what I saw at the bottom of the Ngorongoro Crater in Tanzania, which is called the 8th natural wonder of the world for good reason.

When you are standing in the middle of a wildebeast and zebra migration, an event that has been going on for thousands and thousands of years, you feel very insignificant.  There are no sounds, other than your breath and the grunts of the animals and the wind and the swishing of tails, and you know deep in your bones that things you thought were very important, really aren’t in the whole grand scheme of things.  Just as she foretold, a new me was reborn.

There is a difference in knowing and truly knowing that you know, and if one witnesses such a thing and does not come to know the true nature of interconnectedness…

that is, that thing we are supposed to come to truly know and feel as a result of an authentic yoga and meditation practice….

…then you are brain-dead.

Maybe more so, dead in the heart-mind.

“What are you?,” the Buddha was asked after his time under the bodhi tree.

Of course one does not have to travel to Africa, or anywhere else for that matter, to experience this. Maybe you only need to sit in your own backyard and mindfully watch and listen and feel.  During one session of my retreat I had the students do 30 minutes of walking meditation. None of them had ever done that before and their experiences were rather potent for them.  They were amazed.

And knowing that you know.

No more discussion is needed.