The other day I read a misinformed comment on another blog about ancient yoga in India. The commenter said, in essence, that classical yoga would not have been taught to women because of India’s patriarchal society, that yoga in ancient times was for men only. I shook my head.

For one thing, I don’t think it’s a good thing to make such sweeping statements about Indian culture unless you’ve been there, more than once. Even then it would be hard to generalize. For another thing, it’s simply not true.

Krishnamacharyga taught Indra Devi. He was a strict Brahmin, but he taught vedic chanting to women believing that it was women who would carry on the vedic chant tradition, not men.

A difficult book to find, the Yogayajnavalyka Samhita written by the sage Yajnavalkya, is one of the oldest texts on yoga. It is a dialogue between the sage Yajnavalkya and his wife Gargi, who was considered one of the most learned women of those times. Gargi poses questions to her husband on how to reach the highest truth. The manuscript, translated by Krishnamacharya and then later translated into English by his son, Desikachar, is dedicated to “all great women.”

Yajnavalkya is considered one of the most important teachers in the Vedic tradition. His works are so vast that it can only be compared to those of the Veda Vyasa. He contributed to the Vedas through the Sukla Yajur Veda and the Brhadaranyaka Upanisad. His wife Gargi is mentioned in the Brhadaranyaka Upanisad as “a scholar in all the sastra-s”, as one of the women seekers of truth, and one who was very proficient in logic.

The only asanas mentioned in the book are: svastiknasana; gomukhasana; padmasana; virasana; simhasana; bhadrasana; muktasana; and mayurasana — because that one “removes all internal diseases and even the effect of poison.” You will note that all poses except peacock pose are seated poses.

So as for the statement about how yoga was only for men in the ancient times…uh, no. I think it behooves any yoga scholar or historian to move beyond what is traditionally taught and to investigate the rich yogini tradition of ancient India. Remember that there is both shiva-shakti, the lingam and the yoni.

I had read about the Temple of the 64 Yoginis (also called the Temple of the 64 Dakinis) in Hirapur, a village outside Bhubaneswar in the state of Orissa, and I knew I had to see it. These small temples were for tantric practices, for the acquisition of siddhis or “supernatural powers.” Yogini worship was seen predominately between 800 and 1300 AD.

“The cult of 64 yoginis as well as its occult and secret practices and philosophy are methodised by Matsyendranath (8th to 10th century AD) in his magnum opus, Kaulajnananimaya. He is associated with religious movements of medieval India and is revered in neighbouring countries like Nepal and Tibet.

The number of yoginis differ from one source to another but 64 appears to have been generally accepted. The principal yoginis, also known as Mother-Goddesses, are Brahmani, Mahesvari, Vaishnavi, Kaumari, Varahi, Indrani and Chamunda who according to the myths were created to the drink blood of demons….

A circular wall, hardly 2 metres in height, containing 64 niches within its inner circumference encompass this hypaethral yogini shrine. All except one of these contain an image of a yogini goddess. Some of them are delineated with voluptuous bodies, some with horrific shrunken features, still others with animal heads.”

I did not take any photos as sometimes I don’t feel right about doing that, depending on the temple. I wanted to experience things without being behind a lens. When we arrived we were told the significance of each yogini and then a puja was done for us. We were the only visitors and it was very special for me — I felt the energy of the little Kali behind me. Unlike the huge Tamil Nadu temples I am so familiar with, there are no soaring spires here. Thousands of years ago this was the beating heart of a primeval society, open to the elements but hidden from outsiders. Dedicated to worship of the Mother Goddess in all her forms, I felt safe. In one niche there was a female Ganesha, the yogini Ganesani. There were many others such a yogini with the face of a bear, and others wearing garlands of human heads or holding different weapons. There were also the familiar goddesses such as Lakshmi and Chamundi. The yoginis were regarded with both fear and awe.

An image of Shiva is also found here and there is a square slab that the priest told me is believed to have been used by wandering tantriks as a sacrificial altar. I climbed on top and immediately felt the urge to dance, the same way I wanted to dance when I felt the energy in the Park Street Cemetery in Kolkata. Something about those charnal grounds…. 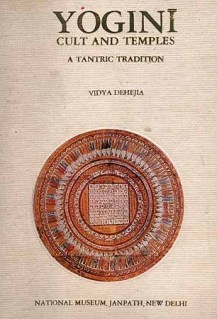 I’ve recently learned about the above book and I will definitely buy it to learn more about these powerful yoginis. “It appears that the worship of the Yoginis… was one of the significant, though less familiar, cults practiced by the Saktas who believed in the supremacy of Sakti or Power concentrated in the person of the Great Goddess.”