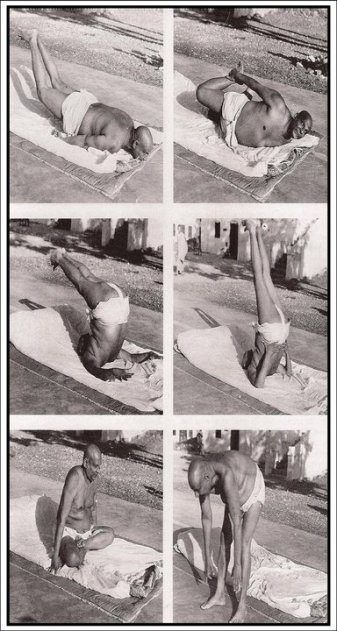 Let’s see….in a “modern” yoga class Swamiji would be told his yoga is “wrong”…..
Oh my! His legs aren’t straight in locust!
He has a rounded back in his forward fold!
Look at his hand position in shoulderstand! He must not know what he’s doing! Shame on his yoga teacher for allowing him to do that! His fingers MUST point up, not turned out to the side, that’s not right! He is seriously going to injure himself!
In a “modern” yoga class Sivanandaji would also be told to put his elbows closer together in his shoulderstand and a teacher would immediately run up to put a strap around his upper arms because that’s the way his arms “should” be.

And Swami, look at your belly! You need a lot more CORE WORK! C’mon, Swami…get a Yoga for Abs DVD!