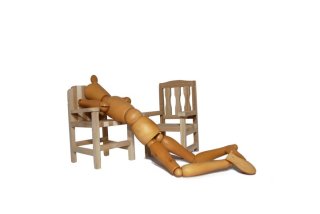 A trauma survivor can be an adult survivor of childhood abuse, a domestic violence survivor, a survivor of sexual assault, someone who was in a horrible car wreck or natural disaster, or a returning soldier with Post-Traumatic Stress Disorder (PTSD.)

Basically, anyone who walks into your class. As teachers, we never know what a student’s story is, either physically or psychologically.

A “trauma sensitive” yoga class is taught very differently from the yoga class with which we are familiar — soft music, altars, incense, physical adjustments. A typical yoga class may not be comfortable place for a trauma survivor and in fact may feel very dangerous. Merely saying the word “relax” can be a PTSD trigger if the person was told to relax and then was abused.

For someone who has been abused, a physical assist can be a severe trigger for PTSD. Many teachers say, “but I always ask first.” Think about that statement. For someone who has a history of abuse and was not allowed to say no (so has issues with power and control), assists are problematic.

Dr. Bessel van der Kolk is the recognized authority on PTSD and heads The Trauma Center in Brookline, Massachusetts. He has said that “the goal of treatment of PTSD is to help people live in the present without feeling or behaving according to demands belonging to the past.”

The Trauma Center has begun to establish empirically that yoga is helpful for people with PTSD (van der Kolk, 2006). Along with feedback such as, “I feel like I can use my body again,” the groundbreaking study that the Trauma Center conducted in 2004 showed that yoga changes core brain physiology related to PTSD and trauma.

In a brain subjected to trauma, parts of the brain can be underdeveloped; parts of the brain can be atrophied; a compromised neocortex (the “thinking” brain) can not regulate the lower brain (the limbic brain is the emotional center of the brain); there is a lack of synaptic connections. The amygdala is the alarm clock of the brain, it is the site of stored memory and bodily sensations. It becomes engorged and overactive in PTSD. The corpus callo is the fibrous material beneath the cortex that transmits information between the two hemispheres of the brain — in PTSD this can atrophy. The right side of the prefrontal cortex can atrophy in PTSD. These are just three examples of structural changes in a traumatized brain.

This makes recent research on how the brain can change (neuroplasticity) huge. The research is out there, you can google it: via yoga and meditation, new synaptic connections are made, old pathways are reactivated and there is neurogenesis. The Trauma Center’s research has shown that a 60 minute yoga class once a week in a 10 week session begins to reduce PTSD symptoms.

So how do you make your class “trauma sensitive”? As teachers we naturally think our classes are healing in a certain way, but some aren’t. We were told how Iyengar yoga classes, for example, because of the language used and the way many are taught can be problematic for trauma survivors. Seeing yoga straps lined up on a wall is not a good environment for someone who was tied down and abused.

Since much of trauma was caused by physical manipulations, physical assists for the most part are out of the question. At the root of trauma/PTSD is an extreme lack of choice. With specific yoga shapes (don’t say “pose”), trauma sensitive yoga teachers invite people to begin to make choices again in a direct relationship to their experience. All these choices are about safety, comfort, and ease.

Environment is important: smells, mirrors, exposed windows, closets, temperature, and lighting can all be PTSD triggers to someone.

Do you see where I am going with this? ANYTHING a yoga teacher does can be a trigger for PTSD. How many teachers are equipped to handle stress responses that may come up such as hyperarousal, hypoarousal, disassociation, or flashbacks? If a stress response happens, one key is to start moving the large muscles like gluts or quads because those muscles use up the stress hormone cortisol (Warriors, forward bends.)

For a trauma survivor in a yoga class, it’s about reclaiming their body, not about a teacher manipulating a student into a shape. As teachers we need to cultivate our ability to offer verbal assists. In trauma/PTSD, survivors have “lost” their bodies. Our teacher gave an example of how one of his students said she felt like she had a hole where her stomach should be. As yoga teachers it is not our job to “fix” a student, but to help them begin to trust their bodies again. It’s about helping students use their bodies and breath as resources for self-regulation, calming themselves down if need be. Physical assists create dependency.

In a trauma sensitive yoga class, language must change: no absolutist, commanding language; use concrete and visceral language; no woo-woo “out of body” language, no metaphors. It is the invitatory language of inquiry that directs attention to the body and invites mindful movement and breathing. The teachers advised us not to say “be gentle with yourself” because that comes across as a challenge that can set people up for failure — trauma survivors don’t know how to be gentle with themselves. Even the word “play” (saying “play with the pose” is not a good idea) is a loaded word. Emphasize choice: “as you are ready”; “if you like”; “you decide”; “you choose.”

Use non-intimate language for body parts: sternum v. chest; base of spine v. tailbone; seat v. butt or pelvis. However, ANY word can be a trigger and a teacher must be able to handle triggers.

Use non-aggressive language. How many of us have been in a yoga class with a drill sergeant instead of a yoga teacher — “you SHOULD look like this.” An abuse victim interprets your words differently than a soldier would with PTSD. The body is not a combat zone…for any of us.

Some of the loaded poses (for obvious reasons) are Happy Baby, hip openers, chest openers. Powerful bodily sensations can create powerful emotions so these poses must be taken slowly, in increments. Bookend a new pose with a familiar pose.