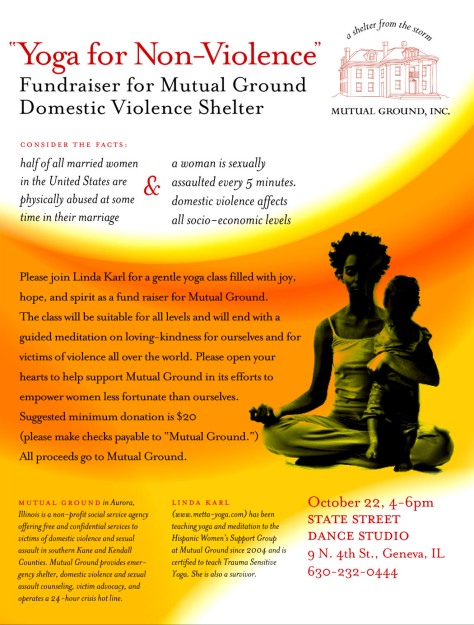 October is Domestic Violence Awareness month and before it ends I want to make you aware of statistics on domestic violence.  This is a post I wrote last year with things that may shock you.  Or not.

The yoga fundraiser on Saturday was a success in that a dozen people attended (mostly my students and others who know me) and once the cash is doubled by a private charitable trust, the shelter will receive a little over $1,000.  Included in that amount is a check for $300 sent by a woman who took a few classes with me a long time ago because she could not attend the fundraiser but she would “be there in spirit.”  Nice!

I met with the shelter director during the summer and we talked about starting a weekly yoga program, but at this point in time there is no money for it (I only teach one night a month.)  People always ask me, “why don’t they just apply for a grant so they can pay you?”  The shelter recently received a $20,000 grant from the Mary Kay Foundation and this is what the director told me about that:

“The $20,000 is general operating money that is really just filling a hole we had where we had lost funding over the last couple of years.  We are still running with a skeleton crew that are stretched way too thin.  On top of that, they have not gotten even a cost of living increase in over 3 years.  So that is my first priority as far as funding goes…then I can start thinking about new projects and expanding different projects.  The grant writer is still looking for money specific to a new and innovative way to help victims.”

“A new and innovative way to help victims” means my yoga program.  And so it goes.  And that’s why I do a fundraiser for the shelter.

For about a month before the fundraiser I busted my asana trying to get the word out — emails to local papers, emails to local yoga peeps, tweeting, Facebook, posting flyers in health food stores and coffeehouses, etc.  I understand now how people working for non-profits get burned out.  The owner of the dance studio where the fundraiser was held did a great job getting the word out, she put a flyer into everyone’s hand who came into the studio.  The Nia and dance community also helped spread the the word.  But one group was conspicuous by their absence, in fact, their silence was  deafening.  Need I say it?  The local community of yoga teachers.

I’m beginning to think that use of the phrase “yoga community” should be banned because it’s basically meaningless — at least where I live, but your mileage may vary.  The phrase is used (overused?) in the yoga blogosphere when people write about a group of teachers and/or students getting together for a cause.  My own “yoga community” (which will forever be placed in quotes) is relatively small and most teachers know of or personally know each other.  Hell, me and 7 other yoga teachers use the same massage therapist so every month I get the local yoga 411.

But it never fails to amaze me when a group of people that speaks so much about seva and karma yoga, and who think Seane Corn and Russell Simmons are so cool to occupy Wall Street, can be silent about something going on in their own locale, for a local cause.  To quote two yoga teacher friends (one who attended and one who helped spread the word every week, both who also consider themselves yoga outsiders), they were “amazed” and “horrified” that despite knowing about a yoga fundraiser for a local women’s issue, there was little interest shown by local teachers.  I did hear from two (out of the 20+ teachers who got my email blast) who told me they were sorry they could not attend.

Why is this so-called “yoga community” that is coveted so much so elusive?

Believe me, I get the fact that everyone has their own favorite cause that they donate to, my cause isn’t your cause, but that’s not the point at all.  I don’t care if someone donates $1.00 or $100, support is given in ways other than money.  Sometimes time and interest are more precious than dollar bills.  Don’t support someone expecting to get something in return.  I mean, really?  Read the Gita.  That does not even karmically compute.  Sometimes you do things to help, unasked.  Just ’cause it’s the right thing to do.

The kicker was when a local teacher who was a Facebook “friend” deleted my comment about the fundraiser and defriended me.  Wow.  Didn’t know promoting seva is such an evil thing to do.  She had posted on her FB page about an event at the local studio that was in the evening on the same day as the fundraiser.  I commented something to the effect, “don’t forget about the yoga fundraiser: karma yoga, go out to dinner, then go to the event.”  That was it.  Innocuous.  The thing is, I’ve known this teacher for about 7 years, I’ve been in her class, she’s been in mine, not friends (as I don’t use that term loosely), but acquaintances, knowing the same local yoga peeps.  Delete.  Defriend.  Uh, what?!?  The irony was that she had sent me a message a few weeks earlier about how important domestic violence issues are to her and she wanted to donate money.  Guess I’m not getting that dough now.

With one of the themes being superficiality, I always loved the way Burl Ives’ character in the movie Cat on a Hot Tin Roof spit out the word mendacity as something unacceptable.

When another blog reader posted this on my FB wall, I had to chuckle.  Good in theory, in practice, maybe not so much:  “hold a fundraising event for a local charity…the success of working and coming together to do something good close to home creates a perfect opportunity for students to connect with one another.”

Over the the past month I’ve had a good think about this whole “yoga community” idea/ideal that is perpetrated in the we’re-all-one-big-happy-kula, kumbaya.  It is something that some yoga person somewhere is always telling us to strive for, i.e., the collective yoga thang.  Buddhists refer to it as sangha.  The Universe must be sending me messages because just when I needed to hear it, I received another email from a relatively new reader in Canada.  The writer told me that while her yoga journey is not as seasoned as my own, she does know that “the ‘yoga community’ is the one you create, in your heart and in your space.  I only allow those that resonate my values into my space.”  Very wise.  And true.

I will also take the words of my Sister Kali Grrl, Svasti, to heart:  “work at defusing your road rage, and/or all those little things that niggle you in life. The stuff that makes you snarky, snippy or snappy at yourself/others on your bad days. Because my lovelies, THAT is all inflammation. And too much inflammation will make you sick.”   Because Svasti and others who resonate my values ARE my yoga community, my sangha, and it’s not necessarily where I live.  It was serendipitous to also read that “real communities live because of a passion that is shared by those who belong to it. And when it’s strong enough, that community can exist anywhere.”

I’m universal, and I forgot, for a short time, when I was at my lowest yet again, my passion all wrung out, that I am indeed swimming in grace.

In the end, does any of it really matter, that is, is it really important to me who gives a damn?  Maybe, maybe not, but a wise friend told me a long time ago, “stay passionate and keep holding that mirror up because somebody’s got to do it.”

But if you see Seane Corn, tell her to put her money where her mouth is and send a yoga sister some healthy bucks from her organization to start a weekly yoga program at the shelter.