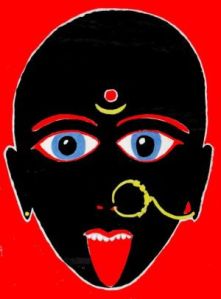 Time for another yoga rant. Here’s my first one on yoga and ageism.

Hmmmmm, let’s see…what’s been bugging me lately about the state of yoga?

Gum chewing.
Can someone tell me why anyone would chew gum in a yoga class? Maybe I should make people take it out and put it on their nose like my teachers did in elementary school. Not me, of course, because I never got into gum chewing, I was a Three Musketeers girl.

Why someone would sit in a yoga class and chew gum is totally beyond me. I have had to make it a rule in my college yoga class that gum chewing is strictly verboten, and if I see anyone’s jaws moving up and down they either have to swallow it or throw it out. Really. I’m that tough.

But those are college kids. What about older adults who chew gum in class? I do a lot of pranayama and meditation in my classes — how can someone be mindful when their jaws are flapping? Can someone explain this to me because I don’t get it.

No yoga mats.
I obviously don’t expect someone who has never done yoga to be an expert, but if someone signs up for a class, shouldn’t they do a little research on what “equipment” a yoga class requires? Why do people look so shocked when I tell them that a yoga mat is required for a yoga class? Why is it such a big surprise? Not a beach towel, not a blanket, a yoga mat. Is it because maybe they think a yoga class is like an aerobics class? Or is it because despite all the hype and trendiness of yoga in 2007, it’s not really as mainstream as we yoga peeps think it is?

Over-adjusting aka micro-managing a human body.
For the four year anniversary of the yoga studio where I teach, we had a free round-robin class where the teachers took 10 or 15 minute segments and each taught a portion of the class. The teachers participated in the class while waiting their turn to teach. Only one of the teachers chose to go around the room adjusting.

I’m not a big adjuster. It’s just the way I was trained. I’ve never seen my trainer do a lot of adjustments and he studied with Pattabhi Jois and is also Iyengar trained. He’s barely ever adjusted me in the six years I’ve known him. If one of my students needs to be adjusted, I try to do so first verbally because I want my students to try to feel and intuit for themselves (especially beginners) and if that does not work, I use a light touch, two fingers. I don’t crank on people with both hands or lie on top of them like I’ve seen some teachers do.

I’m doing the practice and I’m noticing how much the teacher is adjusting people. I won’t say what style this teacher teaches but I believe that the people who are attracted to this particular brand of yoga are Type A personalities at best and control freaks at worst. Hey, just my two rupees. We all go to the yoga that resonates with us.

So I’m watching her move a heel over two centimeters, or pulling a shoulder back about three centimeters and I’m thinking, “why don’t you leave people alone? why don’t you just let people flow and feel and enjoy their practice?” The thing was, the students she was adjusting weren’t practicing in a way that would have compromised their bodies or injured them, so what did moving a toe a quarter inch accomplish? And why is she fiddling with the wrinkles on the back of a student’s neck? I would have yelled, “get off me!”

What she was doing bugged me so much I stopped and started walking around, just watching to see that people were safe, looking for major “unalignments.”

I know it was all me, I should not have let her actions bug me, but they did. But why do some yoga teachers feel the need to micro-manage their students’ bodies? Every body is different. I have gotten so far away from the mindset that everyone “should” look a certain way in a pose that one of my students says he loves my classes because it’s “yoga without rules.” Well, not quite, but I want my students to try to fully connect mind/body/breath without the imposition of my ego on their practice or their bodies.

ahhhhhh….rant over. now I feel better….