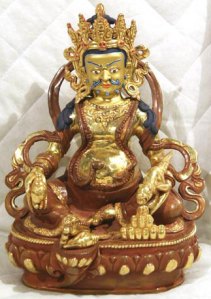 Dzambhala — Buddhist — He embodies the power of wealth to benefit beings. He symbolizes “richness” in all its forms and holds the mongoose which vomits jewels for the benefit of beings. 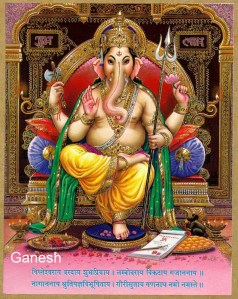 Right Livelihood is one part of the Ethical Conducts in the Noble Eightfold Path of Buddha together with Right Speech and Right Action.

Right livelihood means that one should earn one’s living in a righteous way and that wealth should be gained legally and peacefully. The Buddha mentions four specific activities that harm other beings and that one should avoid for this reason: 1. dealing in weapons, 2. dealing in living beings (including raising animals for slaughter as well as slave trade and prostitution), 3. working in meat production and butchery, and 4. selling intoxicants and poisons, such as alcohol and drugs. Furthermore any other occupation that would violate the principles of right speech and right action should be avoided.

As long as I’ve been teaching yoga I’ve had more than a few discussions with yoga teachers about whether it’s really OK to be paid for teaching yoga. One yoga teacher tells me that “yoga is really supposed to be taught for free.” Uh…really? Where does it say that in the Yoga Teacher By-Laws? Did I miss the fine print somewhere? Actually I do teach for free and that’s my karma yoga that I do once a month at a domestic violence shelter and I’ve been doing that for going on three years now. Truth be told, it’s my favorite class to teach.

One of my private students is a business entrepeneur and we discussed Right Livelihood when he gave me advice on starting a yoga clothes business. He rolled his eyes when I told him how some yoga teachers believe that yoga should be free and he said, “I see lots of ads in Yoga Journal so somebody is making money.”

Money itself is not good or bad, that’s merely a judgment. Money just IS. It’s all about how it’s used and what it’s used for.

Ethan Nichtern, creator of the ID Project and son of David Nichtern, gives a great interview on Buddhism & Money: Does Priceless Mean It’s Free?. While he speaks specifically about the spiritual economics of teaching the dharma and what Right Livelihood ought to look like in a market economy, everything he says can also be applied to the spiritual economics of teaching yoga.

In this culture, the reality is that yoga is big business. A yoga teacher is performing a service just like a massage therapist, an acupuncturist, or a “Life Coach.” Ethan makes the excellent point that Life Coaches charge upwards of $100 an hour, while a dharma teacher, especially one who has gone through many hours of training in, for example, the Shambhala tradition, is sometimes much better equipped than a Life Coach to help someone. But are you going to pay your dharma teacher $100 an hour? I didn’t think so.

It’s about the perception of value, what value do you place on yoga, meditation, or the dharma? Ethan said that when he managed a Shambhala center they would ask people to “donate” $25 toward something, but they would say that $25 wasn’t in their budget. But two days later he’d go out to dinner with the same people and they would spend more than $25 on dinner and drinks.

I see that all the time at the studio where I teach. Early this year I did a fundraiser for the domestic violence shelter and had a donation box on the desk. The studio also has a small retail section so I would watch women write checks for $100 for yoga clothes, but when the donation box would be pointed out to them they did not have a buck to donate. But 15 minutes later I would see them down the street at Starbucks paying $4.00 for a double shot carmel macadoodle frappawhozit whatever.

One of the best pieces of business advice I ever got was from my first accountant when I started my garden design business. He said, “never give away your services, because if it’s free, people won’t value it.” Ethan says the same thing when he says that teaching the dharma is priceless, but the western capitalist mindset equates “price-less” with “it doesn’t have a price.”

To paraphrase Ethan, our motivation as yoga or dharma teachers should not be toward the bling, but we also need to get out of the naive “poverty mentality” about teaching.