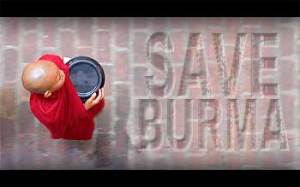 How can anyone not be moved by the sight of thousands of Buddhist monks marching in peaceful protest against a military regime? Witnesses reported that the monks marched from their monasteries chanting the “Metta Sutta” (the Buddha’s words on loving-kindness.) The army has been told to be prepared to fire at demonstrators when the command is given and hospitals have been told to clear their wards.

The monks have vowed not to back down. Their alms bowls remain overturned. Which will prevail — metta or bloodshed?

For the last week, thousands of Burmese monks have marched against the repressive Burmese military regime in cities across that nation. This is the largest public demonstration against the junta in nearly 20 years. As the Alliance of All Burmese Buddhist Monks march, chant, and overturn their almsbowls (patam nikkujjana kamma), refusing to accept donations from members of the military regime, the Buddhist Peace Fellowship offers our full support and solidarity.

There is an appeal to pause and meditate.

The monks of Burma are taking a great chance, trying to transform the the ruling military regime with metta (loving-kindness), quiet courage, and discipline.

They have asked the people of Burma and those who support them, to meditate and pray silently for 15 minutes at 2000 hours this Tuesday, tomorrow:

Will you join them? Thoughts are energy. Can we collectively send our thoughts of metta to Burma, indeed, to the entire world? Can you afford a mere 15 minutes of your time to concentrate on peace and loving-kindness?

Message from His Holiness the Dalai Lama
September 23, 2007

I extent my support and solidarity with the recent peaceful movement for democracy in Burma. I fully support their call for freedom and democracy and take this opportunity to appeal to freedom-loving people all over the world to support such non-violent movements.

Moreover, I wish to convey my sincere appreciation and admiration to the large number of fellow Buddhists monks for advocating democracy and freedom in Burma.

As a Buddhist monk, I am appealing to the members of the military regime who believe in Buddhism to act in accordance with the sacred dharma in the spirit of compassion and non-violence.

I pray for the success of this peaceful movement and the early release of fellow Nobel Peace Laureate Aung San Suu Kyi.