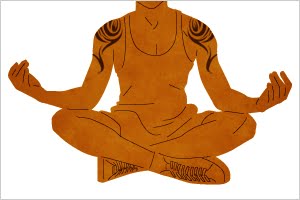 OK, I really wasn’t kicked out. I just wasn’t let in.

In 2006 I did my first 10 day silent vipassana retreat here that is in the strict Goenka tradition. A requirement of the Mindfulness Yoga and Meditation Training that I did at Spirit Rock Meditation Center in California was that one had to sit a 5 day or longer vipassana retreat.

The vipassana retreat was my first long silent retreat and it was the hardest thing I have ever done but the most transformative. I went through 6 days of hell, but on the 7th was reborn, so to speak. I ended up loving my experience. In fact, if I had my own yoga teacher training program a vipassana retreat would be one of the requirements for certification, that’s how important I think it is. If you want my piece of paper you would have to sit in silence 10 hours a day for 10 days, no excuses.

I’ve always wanted to return. When I came back from India I felt the need to sit intensely like that and desired the structure of the retreat, don’t ask me why. I wanted to do a three day retreat instead of a 10 day so I applied for a sit in August. If you go to the Illinois website you can see what the lengthy application is all about. They ask you lots of questions about your practice, if you have done any other meditation styles, if you teach any other meditation styles, plus the usual questions about your mental health since strict vipassana is a very intense practice. After writing the application you are then called for a telephone interview.

So being the good yogini that I am I was honest. You know, that whole satya thing. I wrote about my retreats and training at Spirit Rock, who the teachers were, that I am a yoga teacher, that I incorporate meditation in my classes, and that I teach mindfulness meditation.

A very nice woman called to interview me and she was very impressed with my application commenting on everything I have done. She said I could do the retreat as long as I understood not to “mix” my mindfulness meditation with the vipassana practice. I said that I totally understood that and she said I could go on the retreat.

She called me yesterday with the bad news: I could not attend the retreat. Instead of becoming angry or disappointed, feelings of amusement arose. I REALLY wanted to do this retreat (and some of you might think I’m nuts for REALLY wanting to sit 10 hours a day), but for some reason I thought it was hilarious. Maybe it was the woman’s voice. Ginger had the stereotypical voice of a grandmother that you might hear in cartoons. It was classic and precious. How could I get angry at her and besides, what would be the point? She was just following Goenka’s rules. Don’t kill the messenger.

She told me that she looked at my website and was very impressed with my “accomplishments” in yoga teaching and that I trained at Spirit Rock and go to India to study yoga. But I don’t consider myself “special”, I just do what I do. I thought, so just because I’ve done the training that I’ve done, that means I can’t do a 3 day vipassana retreat, something that I really want to do? I mean, I don’t know very many people who would subject themselves to a strict vipassana retreat. In fact, most yogis I know would probably prefer to hang upside down over a fire. WHAT DO YOU MEAN I CAN’T GO?!?

I tried not to chuckle. Ginger sounded so sincere in her compliments about my yoga and meditation practices, how could I dare laugh? She said it was BECAUSE I teach mindfulness meditation that I can’t go. She said that Goenka was very strict about the mixing of any other practice with vipassana (which I already knew) and her supervisor was afraid that I would mix everything up and get “confused” (and go nuts — the teachers are afraid people will freak out because vipassana is an intense practice.) Please stay home she told me.

The bottom line is that one has to make a choice. It’s either a strict vipassana practice or the highway. None of this take one from column A and one from column B. I told Ginger, yeah, but the roots of mindfulness meditation are in vipassana. “Yes, dear, we know,” she said, “but unless you make a choice of what practice you want to do, you can never come back here. Go to Barre instead.” Goenka, via Ginger, banished me to the Insight Meditation Society in Massachusetts. I hung my head. Oh, the shame of it all.

Damn it. I’m banned from every vipassana center in the known and unknown Universe! Sigh. I was really looking forward to all those kriya nightmares ridding me of my samskaras. Mara won’t be visiting me in my dreams now.

So much for honesty is the best policy. If I had said nothing about everything I have done since my first retreat, I would have gotten in. I should have kept my mouth shut.

Well, you know what, Goenka? According to your rules, one is not supposed to do any yoga on a vipassana retreat. But listen up, dude — you know that 4 AM wake up call to sit? I blew that off every day and DID MY YOGA IN MY ROOM!! Yeah, that’s right, I broke the rules!

Gee…ya think they found out about that?