Yes, even in the yoga and meditation worlds.

After my last post about not being allowed to attend a vipassana retreat in the strict Goenka style, one of my long-time readers and supporters, Kevin, sent me this email. I loved what he had to say and he gave me permission to to reprint it.

“I was sorry to hear about your recent encounter with Goenka fundamentalist fervor. I appreciate the fact that that community provides retreats all over the world on a dana basis, but Goenka-ji’s virulent fundamentalism and complete misunderstanding of the history of Buddhism generally and Theravada in particular make him about as good an ambassador and spokesperson for Buddhism as Jerry Falwell is for Christianity (I’m not exaggerating).

As an Indian who “found religion” in Burma he has the fervor only converts can have, and he’s certainly expressed his contempt for Hinduism, yoga of any sort and all other forms of Buddhism many times. It’s clear much of his defensiveness come from the fact that he clearly knows at some level that the particular form of Buddhism he practices and teaches was invented out of whole cloth less than 100 years ago, and has nothing to do with the way meditation is taught in the broader Theravada tradition, let alone the Tibetan or Zen traditions.

The thing is, there is no such thing in the suttas as “vipassana” meditation. Vipassana is insight that arises out of calm abiding (samatha/shamatha) meditation – i.e. anapanasati, or mindfulness of breathing. “Mindfulness” or sati means one thing only: keeping the attention focused on the object of meditation. The superb and well-regarded teacher Thanissaro Bhikku defines this very clearly in the article I’ve attached (from Insight Journal).

Now what’s taught at Spirit Rock is a hybrid of Burmese-style instructions coming from Mahasi Sayadaw and his successors (with Goenka being an offshoot of that) and the Thai forest tradition as represented by Ajahn Chah, which teaches and practices samatha and vipassana the way it is presented in the suttas. The Tibetan tradition preserves the original progression as well: you learn calm abiding (shamatha) and do that for a long time, until the mind is stabilized enough for vipashyana (with Dzogchen and Mahamudra being the ultimate such practices).

The Burmese aberration happened because meditation practice altogether had been lost in Burma by the middle half of the 20th century. The whole tradition had become completely scholastic. The philosophical perspective and techniques they came up with are based on the abhidhamma, with its theory of mind-moments, and in particular on the Visuddhimagga. To put it another way, what Goenka presents as the definitive and original teachings of the Buddha is a lineage-less aberration invented out of whole cloth by scholars who at least had the good sense they needed to learn hot to meditate.

Jack Kornfield goes into huge challenges they had trying to integrate contradictory teachings in his recent article on the history of Spirit Rock, which I’ve also attached.

As someone who really loves the Theravada tradition but who came to it after years of practicing in the Tibetan tradition it kind of drove me crazy to see the total lack of clarity about what is and isn’t mindfulness and how concentration practice differs from insight. I finally got to the root of the problem when I read the fantastic book A History of Mindfulness: How Insight bested Concentration by Sujato Bhikku (who, intellect-wise, is the Ken Wilber of Theravada Buddhism). I think anyone who teaches dharma should be required to read this book, which can be downloaded here:

The fact that Goenka’s clueless staff person said you can’t practice mindfulness on one of their “vipassana” retreats just floors me. What a bunch of Moonies! Well, it’s their huge loss since you are knee-deep in the middle of the transformative yoga and meditation practice that the Buddha himself lived.”

After his email I told Kevin that I just love it all. I am “officially” Buddhist since I’ve taken both the Five and the Eight Precepts in ceremonies, but I love Kali Ma. The shakti blasts that hit me in certain temples in India are too much for me to ignore. I am not going to choose ONLY ONE WAY, I don’t see why I should. It’s all good in my book. I’ve been in the Dalai Lama’s as well as Gelek Rimpoche’s teachings which are Mahayana Buddhism and I study with a Sri Lankan Theravadan Buddhist monk, but sometimes when I sit Kali’s mantra reverberates loudly inside. I certainly don’t feel “confused” as was implied by the vipassana fundie. I feel peace. 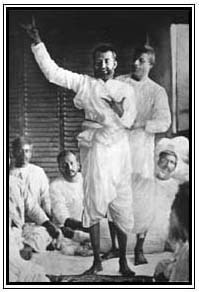 “The winds of grace are always blowing, but you have to raise the sail.” — Ramakrishna

This was Kevin’s response:

“Alan Wallace…has become my favorite meditation teacher over the past few years. In person I find him even clearer than Tibetan teachers I love such as Tsoknyi Rinpoche, Chokyi Nyima Rinpoche and others. One really cool thing about Alan is during his 14 years as a monk he not only did Goenka retreats but also studied with a Sri Lankan master for the better part of a year, doing classic breath meditation the way the Buddha taught. There’s a fantastic contemporary teacher names Leigh Brasington (great web site too: http://www.leighb.com/) who specializes in teaching samatha and jhana in the old way, and he is the dharma heir to the wonderful Ayya Khemma, who also got all her training in Sri Lanka. My point is in connecting with your Sri Lankan teacher – and of course Bhante Gunaratana is another great example – you are connecting with the oldest strains of Theravada there are, unadulterated for the most part with the stuff they came up with in Burma in the 1950’s (though there are Goenka and Mahasi places even in Sri Lanka now).

I’m with you 100% on being open to anything that liberates. Yes I am a Buddhist, but to me that means (as I say when I do the refuge every day) “I take refuge in the teachings and practices that lead to lasting freedom and happiness.”

Patanjali, Sri Krishnamacharya and his successors, Shankaracharya and Ramani Maharishi, Sri Nisardatta Maharaj and countless liberated beings from various traditions throughout the motherland of India are just as much a part of that refuge for me as Lord Buddha – and I don’t think he would have wanted it any other way.”

(correction: Goenka-ji was born in Burma to Indian (and Hindu) parents. The comment about the fervor of converts still applies.)