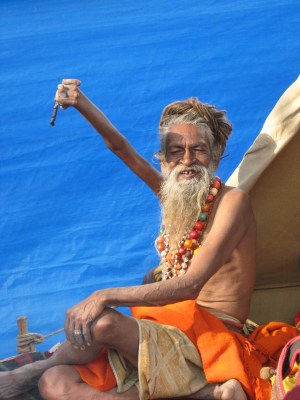 “Tantra” is a word that gets thrown around a lot in yoga circles. It’s a word that many American yogis have become familiar with via Sting who claims that he can get it on for hours because of tantric sex (see the comments that follow in YogaDork’s post.)

I don’t think there is anyone who has done as great a disservice to tantric yoga as Sting because of his comments. The whole sex thang is about 1% of what tantric yoga is about. Once Sting and tantra were on Oprah you knew it was going to be all downhill after that. IMO, if this culture’s attitude about sex wasn’t so f*cked up in the first place (pun intended), there wouldn’t be all the giggle-snorts with the mere mention of the word “tantra.” (“Oh yeah, you mean THE SEX!!” slobber, slobber…)

Then there is John Friend who is sometimes referred to as “Tantra Lite.” In the NY Times article about him that is burning up the yoga blogosphere it states:

“Friend’s “dharma talks” — short sermons — are based largely on simplified tantric principles (not, he stresses, the ones relating to tantric sex): students learn that they are divine beings, that goodness always lies within, that by opening to God’s will — opening to grace, Friend calls it — ‘you actually become vastly more powerful than the limited person that you usually identify with.'”

What I don’t understand is when people talk about Anusara yoga’s concepts such as “opening to grace”, etc.. I have heard more than a few yoga teachers say that they never heard those concepts before in their trainings and I really have to question that.

When I hear a yoga teacher say that they’ve never heard such things before it makes me even more thankful for my non-Anusara inspired teachers and how they taught and what they taught me. I’ve been blessed to have the teachers I’ve had.

Mark Whitwell says, “asana is hatha yoga, the non dual tantra of direct intimacy with Reality that is nothing but nurturing.”

All yoga is nurturing. No one specific brand, no trademarks, just do YOUR YOGA.

So what is tantra? In his book Tantric Yoga and the Wisdom Goddesses, David Frawley writes that “Tantra can best be defined as an energetic approach to the spiritual path, using various techniques including mantra, ritual, pranayama, and meditation. It contains a devotional approach emphasizing the worship of the Goddess and her Lord, Shiva. It contains a way of knowledge, directing us to Self-realization and the realization of the Absolute. As such it is a complex yet integral system for the development of consciousness which has something for all those who are seeking the truth.”

In my training “tantra” was never separate from hatha yoga. The word is a combination of “tanoti” and “trayati”. Tanoti means “to expand, to stretch, to extend” and trayati means “to liberate or free”. Therefore tantra (tan+tra) means to expand one’s experience and awareness of everything, to extend the frontiers of apprehension beyond the material, thereby attaining spiritual knowledge and liberation.

Isn’t that YOGA, no matter what brand name it is?

I learned that “tantra” means “to weave.” Through weaving in certain breath and meditation techniques, we train up our system to become more sensitive to the subtle forces of prana or the vital life force. Through learning to control the prana in yoga you learn to control the mind.

Isn’t that YOGA, no matter who trademarked it?

What inspired this post was a Facebook discussion that followed the above photo. It is a photo I took at the Kumbh Mela of a baba whose arm has atrophied from his austerity, his extreme tapas. My caption to the photo was “no Tantra Lite at the Mela!” because the sadhus I met at the Mela were the real deal, the down and dirty tantric yogis.

Taking part in the Facebook discussion are Carol, blisschick, and Baba Rampuri, who’s about as real of a yogi deal as you can get.

Talk amongst yourselves and leave a comment if you are inspired…..

“blisschick: and the point of that would be…[i.e., the frozen arm]

Carol: Would actually really like it if someone could explain to me: What is this form of Tantra about, and what if any relationship does it have to anything that we call Tantra in this country?

L-S: these sadhus are devotees of Shiva and the upraised arm is a form of mortification or austerity, it’s tapas. it’s a way of showing extreme detachment from the body, transcending the body. other sadhus might stand day and night,… even while sleeping, or they sit in one place and stay sitting there, till they die.

Baba Rampuri: Wonderful photo! It is Naga Baba Amar Bharti Ji in this photo, he is a Naga Sannyasi, and a very close friend for many years. He is an “Urdhvabahu” meaning “raised arm”, but this is a description not a sect. One of the main things distinguishing traditional yoga from American yoga is austerities, “tapas.” It is a powerful means of obtaining knowledge and power. In one way, it’s an extreme form of focusing will power, almost like saying, “Nothing is going to stop me in my quest! Not pain, not discomfort, not the attraction of the world, not even death! I don’t need food, water, nor even air!” When I make disciples, and some of you know that we have 5 gurus, I always choose Amar Bharti Ji to join me as one of the five.

L-S: Carol, what is tantra in this country? In America, hasn’t the phrase been mutilated, people taking a sensationalist approach encompassing only thinking about “sacred sexuality,” with little reference to its true practice as a path to enlightenment? for me, hatha yoga IS tantra yoga because there is philosophy, meditation, and mantra and other practices. don’t forget there is also Buddhist tantra in the Mahayana tradition.

of course American yogis aren’t going to perform austerities like the Urdhabahu baba (who blessed me with his other hand!), or cover their bodies with ash and sit in cremation grounds to try to transcend their worldly attachment to life.

Baba Rampuri: Carol, these days Tantra means anything you want it to. In the West, it’s normally a marketing tag for something to do with new age sexuality, or at best, new age psychology. In India, at it’s worst, it is thought of as black magic. Yoga, as practiced in the West, has nothing whatsoever to do with Tantra as it is practiced in its high and low forms in India. At it’s best, Tantra is the teaching that Shiva gives to Parvati regarding knowledge and immortality. The practice of this involves the connection of Sacred Speech with Knowledge and the corresponding withdrawal from the illusory perception of the world.

Carol: thank you so much, Linda-Sama & Baba Rampuri! I feel so fortunate to wake up & find so many answers to my question. If you are interested, here is a link to a Yoga Journal article that I think captures how I commonly hear Tantra described in the American yoga community: http://www.yogajournal.com/wisdom/2240.

blisschick: It seems very much to me like a denial of the GIFT of this life. If transcending the body were meant to be a spiritual goal, why are we given bodies at all to begin with? (I know these statements will simply be perceived as me not getting it but I find this bothersome. I choose YES and this seems like a giant NO.)

Baba Rampuri: Christine, you are right, if it is his purpose to transcend his body, which it is not. He is pushing the envelope. He is using an extreme practice to get quick results. He is using his body in a way to acquire knowledge.

L-S: thanks for the clarification….I used the wrong word in “transcending”…yes, we have these bodies to use as vehicles for enlightenment (as the Buddha also taught about the “fathom-long body”), but these austerities (to me) show a non-attachment to the body, i.e., “non-attachment” being different from “transcending.”

Carol, I scanned the YJ article and will read it more deeply later…but as for tantra in the US…I have heard people say that they never heard of the tantric concepts or even the word tantra before they studied with John Friend.

I find that a bit hard to believe. I don’t know about anyone else, but I became familiar with tantric concepts from India from my teachers early in my yoga training. so I agree with Baba when he says that it seems that “tantra” can mean almost anything in American yoga. I also think many of the concepts have to be distilled in a different way for westerners. I mean, I’ve been to studios where the mere picture of Durga or Shiva on the wall makes people uncomfortable…how are they going to handle tantric ideas if a teacher talks about them?

blisschick, to me, tantric yoga is about “sacred body-fearless mind”. Buddha taught that the path to enlightenment is in this body, watching body/breath, watching the feelings/felt senses, watching those mind objects that are our thoughts, and embodying the dharma, the ultimate truth of reality which is impermanence. those are the four foundations of mindfulness, and that is how we can use our body, use the physical asana practice to realize deep truths.”