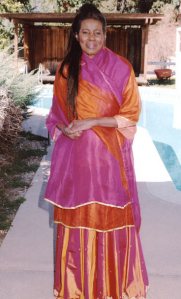 Let the different faiths exist; let them flourish; and let the glory of God be sung in all the languages and in a variety of tunes. That should be the ideal. Respect the differences between the faiths and recognize them as valid as long as they do not extinguish the flame of unity.” – Sri Satya Sai Baba

I love Alice Coltrane. Alice Coltrane was John Coltrane’s wife and both were music revolutionaries. Alice was a pioneer in true yoga music that the current yoga crowd does not know about. I’m so over listening to shmaltzy sweet peace-love-dove new age music in yoga classes. listen to what sister alice has to say about Indian music in this video.

I also want to share with you a new blog I discovered recently…Inspirations and Creative Thoughts: “In sacred remembrance of Divine | Reflection on Life and Spirituality | An evolution of Spirituality | Knowing thyself | Yours and my thoughts | Appreciation for all faiths | Mysticism and Integral Comparative Spirituality .. Hal jazaa ul ihsani illal ihsani? Is the reward of goodness other than goodness? (Quran 55:60)”

There is so much on this blog about spirituality you can literally sit and read for hours.

peace
shanti
a-salaam aleikum
so shall it be

metta to you all

Some of you may know John McLaughlin and the Mahavishnu Orchestra. I saw the original Mahavishnu Orchestra when I was in high school in the 1970s and I was mesmerized. Their albums “Birds of Fire” and “Inner Mounting Flame” are jazz fusion classics and the albums contain poems by Sri Chinmoy. Carlos Santana was also a devotee of Sri Chinmoy.

I know that many yoga people love the popular “yoga” musicians like Jai Uttal, Prem Joshua, and Girish, but if it wasn’t for groundbreakers like John McLaughlin and Shakti, fusing the sounds of Hindustani music with McLaughlin’s guitar, I don’t believe Jai Uttal, et. al. would be around now. Shakti was the real deal.